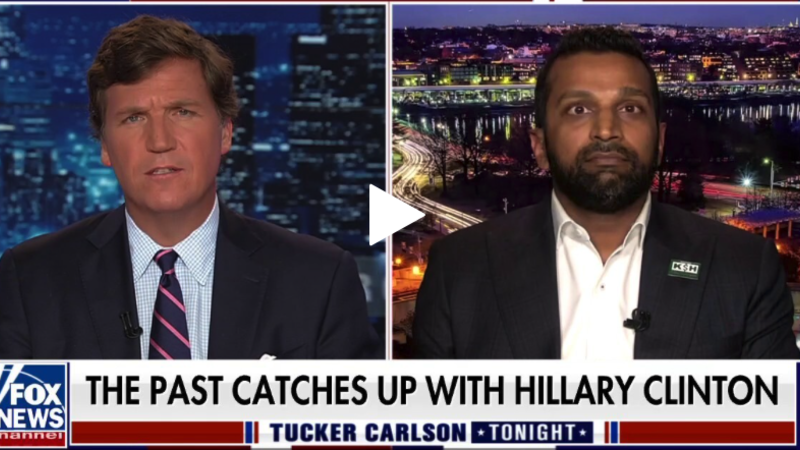 Hillary Clinton's campaign "broke federal law," when they mislabeled payments made to law firm Perkins Coie, and any other campaign doing the same thing would have faced much harsher punishment, former national security adviser to the House Intelligence Committee Kash Patel said Thursday.

"The biggest takeaway is the Hillary Clinton campaign broke federal law by taking political contributions and paying a foreign asset to gin up dirty Russian information that was fake that they funneled into the FBI to falsely surveil President Trump under illegal warrants issued by the Federal Surveillance Court," Patel told  "Tucker Carlson Tonight."

The Federal Election Commission fined Hillary Clinton's campaign and the Democratic National Committee $8,000 and $105,000, respectively, for misfiling expenditures made to law firm Perkins Coie. The law firm hired research firm Fusion GPS to dig up dirt on then-candidate Donald Trump, which lead to the infamous Steele Dossier. The payments to Perkins Coie listed as "legal services" and "legal and compliance consulting" rather than opposition research.

"When I was leading the Russiagate investigation we had to get a subpoena from Congress to get the bank records to show that the Hillary Clinton campaign and the Dems paid for the Steele dossier," Patel told host Tucker Carlson. "And three years later, the FEC finally woke up and said, 'Yes, that's illegal and we need to find them."

Read our latest news on any of these social networks!

We will send you breaking news right to your inbox

Kash: Ds in Process of Removing Biden and Patriots Have Leverage to Get it All
Paid for by
Kash Patel Legal Offense Trust.
Privacy Policy
© 2023 Fight With Kash - All Rights Reserved.