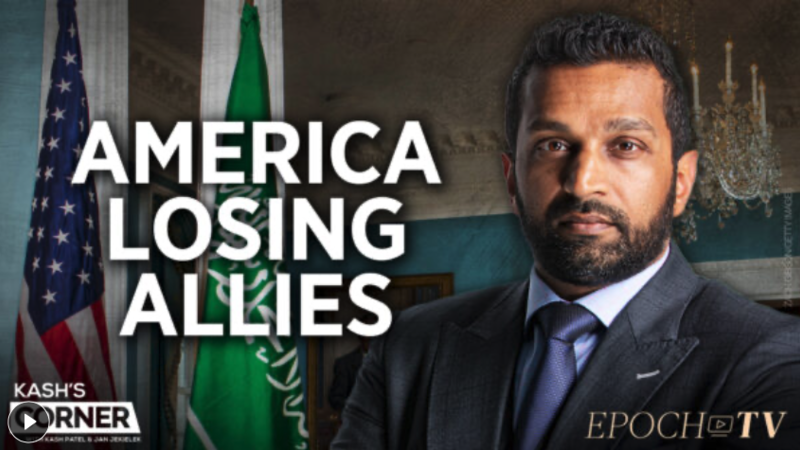 Below is a rush transcript of this Kash’s Corner episode from March 25, 2022. This transcript may not be in its final form and may be updated.

Kash Patel: Hey everybody. And welcome back to Kash’s corner. Jan and I are going to kick off season four from New York City at Epoch Times headquarters, and I could not be happier to be back with everybody.

Jan Jekielek: Well Kash, we’ve been away for a little while, and frankly there is a lot to talk about. I mean, there’s even just the other night, Durham has a new filing, I think in the Danchenko case. We need to talk about that, but let’s leave that for the end. Okay? The thing that’s been really concerning me, over the last month, as we have the Russia-Ukraine war playing out in front of our eyes, is this emergence really of a tighter Russia, China, and some other players as well, block. And so why don’t we start with that.

Mr. Patel: What I think is happening, and we’ll talk through it here, is that Russia is aligning itself with more adversaries of America, for instance, Iran. And obviously we know about China and Xi Jinping’s pact with Putin to basically combine efforts to take on America and decrease America’s sort of superiority in the world, at least in the national security front. Russia, from their perspective, Putin is thinking, how do I continue that trend? How do I continue to strengthen that effort? And the way he does it, is he makes more allies, Putin and Russia with people who are adversarial to the United States, such as Iran.

And an extension beyond that, is if Russia is successful in making allies with our actual allies or getting an Iran to make allies with our actual allies. What I mean by that is, folks that were traditionally American partners, the Saudis, the Emiratis, and other middle Eastern countries. And we can walk through some of that, but I think what he’s doing should be gravely concerning to the so-called Western alliance, the NATO front and everything like that, because these are countries that everyone has to deal with, and it’s not just for oil.

Mr. Jekielek: When we look at this kind of, let’s call it information works. This is a major part of this war, of course Russia, Putin, they’re kind of best in class in these disinformation efforts. I think we’ve known that for a long time. And there’s all sort of course, war propaganda coming out of Ukraine, and frankly the west, and some of the same players that in the past have actually talked about Trump-Russia collusion very hard, and many other things, a very specific vision of COVID very hard, right? So you have a lot of Americans actually looking at this and thinking, “Wow, can I really trust these people now that they’re telling me all these things about Ukraine and the realities there and what they’re supposed to think.”

Mr. Patel: Yeah. I mean, in the couple weeks we took a break from season three to season four, there’s so much, I don’t know if it’s disinformation or misinformation or just areas of information that are questionable. For instance, this whole narrative that, “Is the US funding biological programs in the Ukraine?” I don’t know, I’m out of government. I can’t speak to that? But that’s a valid question. And hopefully it’s no, a simple no, but what I think to your point, so many Americans are just split on that one issue. “Are they? Aren’t they? Is it okay? Isn’t it okay? On the heels of, it took America and the world a little while to realize that the coronavirus came from China and specifically Wuhan. And all the questions surrounding the Wuhan laboratory there, American funding tied to that. There was a huge back and forth on that. And so I think when you extrapolate that pattern from one subject to the next, unfortunately it leads people to continue to question what they’re hearing from their government leaders, especially from the likes of Fauci.

Mr. Jekielek: And frankly, why let’s call it corporate media or mainstream media choose certain ways to present information. Instead of just being able to think, “Okay, this is a reasonable representation.” There’s a whole lot of people out there just thinking, “What can I believe?” Right.

Mr. Patel: It’s hard. And what they should believe is Epoch Times, but I’m biased. But I think we, you and I try to distill through sort of the political narratives that encompass both sides of every issue and try to just present the facts and let people read it, watch it, consume it and say, “Okay, this is what I think on X, Y or Z.”

Mr. Jekielek: So let’s get your thoughts here. Well, first of all, President Biden is I think, as we are recording here on route to speak with NATO, right?

Mr. Patel: Yeah. So here’s the problem. You can’t trail with sanctions. Okay? You have to issue a paper bomb of sanctions from jump. What I mean by that, and let me use Iran and my time in the Trump administration, as an example of how you utilize sanctions effectively. It’s a three prong approach. You have to issue sanctions like we did to the Ayatollah and his regime and crush their ability to access the SWIFT banking system, the European banking system and monetary hard cash holdings throughout the world. We successfully did that on prong A. Prong two, you have to have the willpower to issue kinetic operations, that is military offensive operations, or at least the threat of, where your adversary knows they can’t step too far out of line.

We did for Iran when we killed Qasem Soleimani, the head of the IRGC, the biggest state sponsor of terror, their specials forces arm that has killed and caused more casualties to US soldiers than any foreign terrorist organization on planet earth. The last prong is the diplomatic effort. And what people don’t realize about the diplomatic effort is, you cannot have diplomacy unless you have the threat of a kinetic force behind it. That’s the purpose of conflict. It’s not to stay in war forever. It’s to create space, so your armies and your militaries go out and create space, so the diplomats get together and hopefully find a peaceful solution. That three prong effort worked with Iran under Trump, because what do we do on the diplomatic front? We went to our allies, because Iran doesn’t talk to us, and we actually, under Trump, successfully returned American hostages being held captive in Iran.

That’s how you do the trifold as I call it of international relations. When Joe Biden goes to NATO and says, “I’m going to now, a month after Putin has launched his war, issue sanctions on some Russian individuals.” I think the response is going to be the same as Putin’s was before he invaded the Ukraine, “Who cares?” This commander-in-chief is not going to stop me. I’m going to continue to do what I want. I’ve got China backing me. They’ve got banks, they’ve got money. I’ve got access to Iran’s monetary system now. Oh and by the way, apparently Joe Biden has named Russia, the neutral arbitrar for re-entry into the Iran Nuclear Deal, which I know we’re going to talk about in a little bit.

Mr. Jekielek: It’s kind of bizarre to imagine that Russia in the midst of being isolated from the world, being a pariah, doing all these terrible things is now supposed to be, I guess the arbiter of the re-entry into an Iran deal. I don’t…

Read our latest news on any of these social networks!

We will send you breaking news right to your inbox

Kash: Ds in Process of Removing Biden and Patriots Have Leverage to Get it All
Paid for by
Kash Patel Legal Offense Trust.
Privacy Policy
© 2023 Fight With Kash - All Rights Reserved.